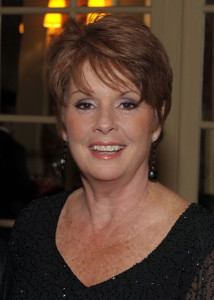 This week the GO! Network in St. Louis was closed. A not-for-profit organization begun in 2008, GO! Network committed to teaching, mentoring, nurturing and supporting people who found themselves in career transition. There was clearly no shortage of members as in the four and one half years of its existence over 4,500 people participated in the various programs offered.

Over the last two years the heart and soul of GO! Network was a former “axe-woman”. Think of a female Ryan Bingham (George Clooney’s character in the movie Up In The Air). This sounds like a questionable choice, areally bad parody or the worst situation possible for those in need of support, guidance, hope and direction – right? Well, in a word – no…not once you meet this Friday’s Fearless Brand – Roni Chambers.

As the former director of human resources for Anheuser-Busch Inc. Roni had terminated hundreds of people both directly and indirectly through the years. When A-B Inc. merged with InBev in 2008 massive layoffs ensued. There were days when Roni had ten, twenty even thirty termination meetings in any given day.

Ironically she was on the receiving end of the termination meeting in 2010. She discovered GO! Network, attended a meeting and never left. Soon after, when the organization was in real danger of closing she took the initiative to become the Executive Director.

You may be asking ‘So what’s the big deal? What makes Roni a fearless brand? She let a lot of people go, got terminated herself and then merely ‘changed sides’!’  Here’s the big deal.

If you have clarity of purpose, conviction in your value and principles, you will be successful in any circumstance.

That is the essence of Roni. Whether in the position of terminating employees or guiding people in transition, Roni is committed to treating everyone with dignity, fairness, firmness and compassion. She gives every one she encounters hope and encouragement. Roni knows her ‘why’. Her principles do not vary regardless of which side of the table she sits on. Roni is consistently authentic.

I sat in the theater during this week’s final presentation. The speaker had a terrific message. No doubt every one in the room benefited. But the star of the day was Roni. She was acknowledged for her efforts over the years at GO! Network. There was an open mike at which a dozen or more attendees shared the impact that Roni had on their lives. Some of those who spoke had been on the receiving end of layoffs she helped to orchestrate. There was a litany of words used to honor her.

How do you build your fearless brand? Know your purpose. Deliver your unique value. Be convicted. Be true to yourself. Be true to those that you serve. Be consistent.