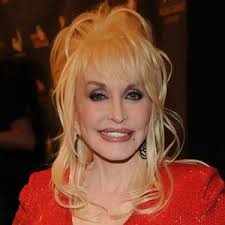 She sat for the interview. Big blonde hair. Full red lips. Long acrylic nails. Ample breasts. A bright blue flower in her hair, matching her blue outfit. It was 1977. Barbara Walters was one of the best known interviewers of her time and Dolly Parton was just emerging as a star.

Dolly said: “Show business is a money making joke, and I’ve just always liked telling jokes”. Barbara Walters replied: “But do you ever feel like you’re the joke? That people make fun of you?” Dolly: “Oh, I know they make fun of me. But actually, all these years, you know, the people have thought the joke’s on me, but it’s actually on the public.”

Dolly Rebecca Parton was born on January 19, 1946 in a one-room cabin on the banks of the Little Pigeon River in Tennessee. She was the fourth of twelve children. Her parents paid the doctor who delivered her with a bag of corn meal. The Partons were poor financially – but rich in family love.

Music came quickly to young Dolly – as did her dreams of becoming a performer. As a young girl, she’d put an empty can on a stick to make a microphone which she then used on her front porch to sing to all the animals in the woods near her home. To Dolly, they weren’t wildlife – they were her audience. Soon after, Dolly would perform on local television and radio stations. .

At the age of twelve, Dolly explored an abandoned church down the hill from her home. There was an old piano missing several strings, pornographic images painted on the walls, and great acoustics for the young singer. It was there that she found God, learned a bit about human anatomy, and enjoyed singing in her own ‘music hall’.

The day after graduating high school, she picked up and moved to Nashville. No plans. No accommodations. But BIG dreams. While she loved performing, she was arguably more talented writing lyrics – and that’s how she began to earn a living in Music Town.

Another significant occurrence happened in those early years in Nashville. While doing her laundry at the Wishy Washy laundromat, she met Carl Dean. The two fell in love almost instantly – and have been married now for fifty-five years.

Dolly’s first break came when Porter Wagoner signed her to be the ‘purty little gal’ on his top rated nationally syndicated television show. During her first performance, the audience roundly booed her – they’d come to love the singer Dolly had replaced. To his credit, Wagoner chastised his audience.

Soon, Dolly’s talent – and charm – took over. Her song, Dumb Blonde, helped to launch her fame. She and Porter Wagoner performed together for years, winning several County Music Awards. But the relationship was often strained, with two determined personalities bumping against each other.

Eventually, Dolly knew it was time to leave. She also knew that Porter didn’t listen very well, especially if the news wasn’t what he wanted to hear. With that, Parton, delivered one of the all-time spectacular resignations. She walked into Wagoner’s office, sat down, and began to play the song she’d written based on her feelings about leaving. That song, I Will Always Love You, would leave Porter in tears and telling Dolly, OK, you can leave, but only if I can produce that song. And the two parted.

The very same night Parton also wrote Jolene, which would become yet one more blockbuster hit. In retrospect, Dolly would say, “I guess it was a good night.”

During that 1977 interview with Barbara Walters, Dolly answered that she’d earned good money to date, but knew there was bigger things ahead. She stated with complete confidence, that she wanted to – no, would – become a superstar.

Now’s a good time to explore why that happened. Dolly Parton is immensely talented. She is driven. Her work ethic is virtually unmatched. By example, much of her lyric writing occurs from midnight until the wee hours of the morning.

The real key to her success, however, is much more intangible. Dolly has an appeal and charm which is almost magical. At the heart of her appeal, is her authenticity. From her earliest days, Dolly Parton has had a clear understanding of herself. She is not phony in the least.

That fact is best seen in her love for her home, her roots. My Tennessee Mountain Home, pays homage to the joys of her youth – the lyrics paint the image for the listener. Her connection to home resonates with most people, regardless of their geographic origin.

Many of her songs tell the story of her life. Coat of Many Colors is the moving tale of Dolly’s mother making a coat for her by patching together a collection of rags. Once at school, Dolly was made fun of by all the other kids. She writes about telling those kids that her coat of many colors – made with love by her mother – was worth more than all their clothes.

Dolly has fans of many colors, many ages, many religions, sexual orientations, political beliefs, and nationality. A Dolly Parton concert is said to be almost other-worldly – a place where a literal potpourri of people come together with a singleness of purpose.

There are Dolly cover artists in Mexico and Africa. The Lebanese immigrant doctor who treated Dolly after her bus was in an accident, used to listen to Dolly’s music back home in Beirut as a young man. When the South African government finally allowed Nelson Mandela to play music throughout the prison on Robben Island, Dolly’s Jolene was on his playlist.

There have been a succession of ‘breaks’ in Dolly’s career – most of which she played an integral role.

Her movie career began when she was cast in the 1980 movie 9 to 5. Dolly wrote the music, notably the title song Working 9 to 5. The song, and the movie, helped to further the movement for women’s rights in the workplace. Want another example of Dolly’s lyrical genius? The song opens with “Tumbled out of bed and stumbled to the kitchen, poured myself a cup of ambition!” Brilliant!

Some of the best music by a duet in country music, if not all of music, feature Dolly Parton and Kenny Rogers. One of their best known is Islands in the Stream. Their voices combined to create a special sound.

The single most significant attribute that makes Dolly Parton a Fearless Brand is her authenticity and that she genuinely cares for everyone,

There will never be another Dolly. However, we can look at some of her actions and beliefs, learn from them, use her example to improve ourselves, and add a little more good to the world.

Be authentic – Sounds so simple – and for Dolly, it appears to be exactly that. Yet it takes effort for many of us to understand ourselves and stay true to ourselves. There are shirts that say “What would Dolly do?” I think she would tell us to do what’s best for us, to follow our hearts and beliefs.

Turn your dreams into action – Dolly envisioned a theme park which would pay tribute to her Tennessee mountain roots. Most of her support team at the time – agent, lawyers, advisors – told her it was a foolish idea. Dollywood is a reality – those naysayers are long gone.

Dollywood is successful because Dolly Parton was totally committed to her vision – her authenticity served her well once again. The theme park has the mandatory water rides, roller coasters. and such – but what makes this attraction uniquely appealing are the exact replicas of key buildings from Dolly’s youth. The family home. The church. All of the structures that made her childhood so special. As with her concerts, visitors say there’s a bit of mystic vibe to the park.

Give back – Dolly Parton is one of the most generous people you could find.

Her Imagination Library mails free books to children in participating areas, beginning at birth to age five. To date, the program has mailed nearly 140,000,000 books to kids in five countries.

When the Gatlinburg fires ravaged much of her beloved Tennessee forest, and nearly 900 homes were destroyed, Dolly stepped up with this pledge. “To aid in their recovery effort, the Dollywood Foundation will provide $1,000 a month to all of those families who lost their homes in the fires for six months so that they can get back on their feet.” She didn’t do that however. Instead, she gave each homeowner $5,000 in the final month as her efforts had raised much more money than expected.

Clearly, Dolly Parton is no joke. She is charismatic yet humble, driven yet generous, quick to joke about her physical attributes, yet as spiritual as a person can be.

We don’t have to be globally recognized superstars to be fearless brands. We can achieve that by following Dolly’s example. Dream big, Work hard. Be kind. Be authentic.