Success, Happiness and All That Jazz… 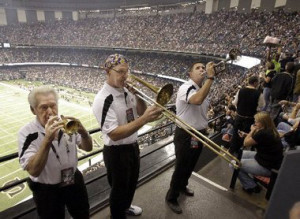 South Louisiana is in my blood – literally. With a father born and raised in New Orleans and a mother who grew up on the bayous of Franklin, La., I come by this honestly. New Orleans is known as “The City That Care Forgot.” The culture is one which focuses on making the best of everything, having fun, enjoying life and not getting dragged down by your cares.

The other day my brother David sent a link to an article on NOLA.com which is the online edition of the New Orleans Times Picayune newspaper. It was a feature on the Storyville Jazz Band and focused on its leader, Bruce Hirstius. I found this article to be very powerful. In particular, one quote had a significant impact on me. It referenced the 83 year old leader…

“He has seemingly found happiness and the fountain of youth by simply doing what he absolutely loves,” says trombonist Mark Mullins, one of many young musicians to pass through Storyville’s ranks. “He enjoys himself, and may not know just how contagious that is.”

From a professional perspective, the article evoked a huge smile and a sense of satisfaction. Mullins’ comment on Hirstius demonstrates very clearly how true success is derived by doing what really excites us. Doing what we want to do vs. what we have to do. When I’m coaching clients I spend a great deal of time focusing on how they define success and clarifying their path to achieving that success. It epitomizes the entire focus of my “Seven C’s of Branding” as well as the Go-Giver‘s Five Laws of Stratospheric Success. Find what you’re both good at AND enjoy doing – pursue YOUR definition of Stratospheric Success and you can live a very happy and contented life.

From a personal perspective, I cried like a baby. Yep. Big old alligator tears.

Why? You see, Bruce was my Father’s best friend.  I was flooded by memories of their joking, laughing, talking and  just plain enjoying each other. Bruce targeted his humor at my Dad, my Mom, his wife Joann but mainly at himself. Bruce is a man who may be small in stature but he is huge in persona. My Father was a big man (6’3″ 250lbs.) and to see them together was comical just from the juxtaposition of their physicality…and Bruce played off of that too. This article evoked a surprising number and array of personal feelings and stories. Most were filled with warmth and humor. Some, like the memory of Bruce’s face when I asked him to play at my Dad’s funeral, not so much.

I can’t stay focused on how much I miss my Dad – after all he is a son of the City that Care Forgot. I do get to smile broadly at the memories of he and Bruce. Having left New Orleans some years ago, I had lost contact with Bruce and often thought about him and wondered how he was doing. Now I know. Now I can reach out to him and share a laugh and a tear.

Bruce has been married for 60 years; has been playing for the Saints (jazz) for the past thirty years; and has been joking, laughing and spreading joy his entire life.  He shows no signs of slowing down and that is a good thing.

6 comments on “Success, Happiness and All That Jazz…”