This Fearless Brand is “Powered by Poo®” 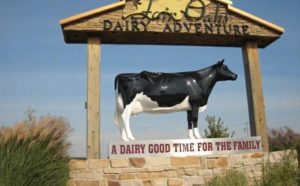 About an hour’s drive south of Chicago, in Northern Indiana, lies one of the most surprisingly popular tourist attractions in America’s heartland. It’s not a theme park, not a sports venue, and it’s not replicated anywhere. This unique attraction is a 33,000-acre farm. Yes, a farm. Fair Oaks Farms draws over 600,000 visitors a year – and that number keeps growing. To understand the appeal, you need to know the vision that led to the creation of Fair Oaks Farms.

Its founders are Mike and Sue McCloskey. Sue was an art and art history major when she met Mike, a dairy veterinarian. He ran a consulting practice, eventually venturing into dairy farming. The couple was committed to producing high quality dairy products. In 1994, the McCloskey’s joined with many other like-minded farmers to create Select Milk Producers, based in New Mexico. Their high-quality milk found distribution in the San Antonio based HEB supermarket chain. Today, Select Milk Producers is comprised of ninety-nine independent farms and ranks as the sixth largest milk cooperative in the U.S.

Mike and Sue envisioned starting a farm which adhered to their farming principles – quality, transparency, sustainability, environmentally responsible, and committed to ethical treatment of their animals. The farm was something they knew they could create – soon, however, they realized it was something that they were compelled to create.

The McCloskeys were very aware of people against modern farming and animal agriculture. Their detractors were loud, well-funded, passionate – often putting out misleading, or flat out wrong, information. Mike and Sue took the time to study the detractors. They were certainly fervent in their beliefs, well-spoken, and cynical. Rather than confront these organizations, the McCloskeys became committed to education.

Fair Oaks Farms was founded in 2004. They say the key to business is location, location, location – and there’s certainly truth to that. The Northwest Indiana site was selected because in addition to its being prime land for dairy farming – it is halfway between Chicago and Indianapolis. Over 45,000 cars per day travel Interstate 65 between the two cities and there are over 28 million people living within a 175-mile radius of the farm. The location created the potential to expose literally millions of people to modern farming.

Location, however, means very little without purpose and value. Fair Oaks Farms was created to deliver both. The McCloskeys incorporated tourism and education from the ground floor. They designed a layout which would accommodate school field trips, tour groups, families, and individuals. Every section of the farm featured up-close viewing stations, complemented by staff knowledgeable in farming and customer service.

Fair Oaks Farm presents a transparent learning opportunity, but not just for detractors. Fair Oaks Farm attracts curious people – those who love farming, city folks who’ve never set foot on a farm, and every person in between.

Once there, visitors to this working farm are exposed to a fully integrated, self-supporting operation. More than 32,000 dairy cows produce over 2.5 million pound of milk – every day. That’s enough milk to supply the entire population of Chicago and Indianapolis. Eighty calves are born every day – and yes, there are viewing stations for those interested in witnessing the process.

With that many cows, there’s no shortage of cow manure – poo. Fair Oaks Farms collects all of the manure which is then processed into compressed natural gas (CNG). This biogas, is then used to power 100% of the farm’s electrical needs. The solid waste which remains is used as fertilizer for the cattle feed, grown on the farm.

There’s enough ‘poo’ that Fair Oaks Farms also uses CNG to fuel their fleet of 43 milk trucks. There is a CNG station on the farm as well one on the border of Indiana and Kentucky. This process has replaced the equivalent of nearly 2 million gallons of diesel fuel and related costs.

Fair Oaks Farms was created as a for-profit business It is also as means to educate the public about modern farming – especially detractors. More than that it is proof that a farm – or any business can use imagination and technology to reduce their carbon footprint Fair Oaks Farms’ footprint is nearly zero. A business can be environmentally responsible and profitable. A transparent business can educate, attract, and convert its most fervent naysayers. Fair Oaks Farms was built to be a fearless brand – even though Mike and Sue McCloskey had no idea they were doing so.

What can we learn from a company “Powered by Poo®”? Plenty.

Know your purpose – Mike and Sue McCloskey’s original vision was simple – provide better nutrition for the world. They didn’t stop there, however. They were committed to executing a business plan which had positive impact to all aspects of the operation. Yes, they use the phrase “Powered by Poo”, but I submit that they are more driven by purpose. If you don’t know your purpose, make the investment of time and effort to discover it – that power is immeasurable.

Transparency is powerful – When Mike and Sue McCloskey saw a true threat to farming, they could have initiated an antagonistic response and engaged in a ‘war of words’. Rather, they sought to understand their detractors and their concerns. Mike and Sue knew, without question, that their beliefs and practices were valid and would be successful. They resolved that the best way to address anyone’s concerns was to ‘open the door’ and allow anyone interested to see their operation. Many fear transparency, yet the benefits almost always outweigh the risk.

Innovation is always possible – The amount of innovation evident in Fair Oaks Farm is almost overwhelming – yet it’s not. Fair Oaks Farm, the McCloskeys, and their many partners, have embraced new approaches which are of tremendous benefit to their farm, to their industry – to all business. “We’ve never done it like that!” or “We’ve always done it this way!” or “That idea is just a bunch of poo!” all inhibit innovation. Fearing change, remaining in the comfort of the familiar, loving the status quo, are all surefire ways to stagnate and eventually fail. Seek innovation. Consider the ‘impossible’. Innovation is the key to progress.

Keep adjusting, keep adding value – Fair Oaks Farm has added a farm-to-table restaurant. They’ve added a pig adventure and a crop adventure to their dairy adventure. A 100-room hotel is under construction. These enhancements are good business decisions because they add value to their tourists, and attract both new and return visitors. Their location continues to be outstanding – the attraction keeps growing. Knowing how and when to adjust while always adding value are key to growing a business brand, and a personal brand.

Fair Oaks Farm has incorporated the latest innovations and technologies into one of man’s oldest professions – farming. Their example is one that each of us can follow and adapt to our own situation in order to achieve our own success…and that’s no poo.