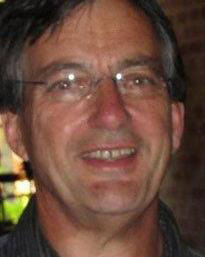 Meet David John Ellis, Jr. this Friday’s Fearless Brand. What’s that you say? Yes, he’s my brother. No, he is not famous. Nor is he powerful. He’s certainly not incredibly wealthy – by monetary standards. Have I resorted to nepotism to select this week’s fearless brand? Well, sort of…but David is featured because he isn’t rich or famous or a power broker. If you get nothing else from this post – please know this…

You don’t have to be famous or wealthy or powerful to be a fearless brand.

That should be good news for virtually everyone since the vast majority of us do not meet any of those three criteria yet all of us are a brand – and each of us can be a fearless brand. It is about being authentic and genuine – courageous and undaunted. It’s about having clarity of and importantly, conviction in our brand. A fearless brand is consistent. My brother David demonstrates all of those qualities.

David is the middle of five children and the first boy. He is a father, a husband and a grandfather. Curious, likable, great character, devoted and spiritual are all words which have been used to describe him. He also has the very rare distinction of being a son of Neptune as he was born on the high seas of the Pacific Ocean.

All of this starts to quantify his brand – pretty much an ‘average Joe’. So, what makes his brand fearless? It is based on his clarity, acceptance and consistency.

Your brand is partly shaped by your value proposition which I define as the intersection of your passions and competencies.

From his late teens David had a sense of self and purpose which most people that age don’t. He went to college but realized that wasn’t his path. He had worked in a supermarket through his high school years. He loved the business and knew that his knowledge and skills would propel him to success.   Simply put he knew his value proposition early in life and followed the appropriate path.

His career advanced from department manager to store manager and ultimately he became a division manager covering stores throughout Southern Louisiana and Mississippi. He had married, fathered an amazing daughter, successfully battled the demons of his life and then life happened. He was diagnosed with Multiple Sclerosis which manifested in his left leg. It is not good for anyone to be diagnosed with MS but for someone who drove hundreds of miles a week in order to walk miles and miles while reviewing stores this was especially disturbing news. It took a few years but eventually David was unable to physically do the job that he loved. He realized his life was about to change forever as he took long-term disability.

This would be devastating to most people – and it certainly wasn’t easy on David. However, rather than adopting an attitude of ‘why me?’ he embraced the idea of ‘why not me?’. This provided everyone who knew him with a demonstration of true humility and acceptance and courage.

He was able to adjust his value proposition by reassessing where his competencies and passions intersect. While that proposition has been adjusted and the people he serves have changed to a degree he remains authentic and genuine, courageous and consistent.

Not only does that make him this Friday’s Fearless Brand – it means that he is richer and more powerful than any of the rich and famous.