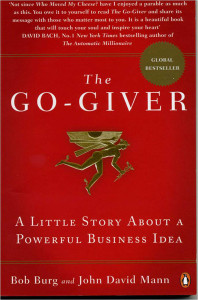 If you have read The Go-Giver you know that Joe is the primary character in this “little story about a powerful business idea.” You know Ernesto, Pindar and the full cast of characters. If you are one of the  people who have not yet read this book – I am hopeful that this writing may be the inspiration for you to do so.

Fearless brands focus on providing maximum value to those they serve.

Joe, the hero in The Go-Giver is an eager, ambitious, hardworking go-getter. As it turns out, he was going more than he was getting. He was desperate to meet his quota – having missed that accomplishment for the preceding two quarters. Joe’s plan was to close a huge deal with the account he called ‘big kahuna’. When told he would not get the deal because his firm lacked clout and leverage Joe seeks counsel from a wise and experienced co-worker. Joe is introduced to The Chairman – Pindar – and sets out to find his ‘Trade Secret’.

This introduction launches Joe on a journey of learning – and understanding – the Five Laws of Stratospheric Success. I won’t tell the entire story here. If you’ve read the book you already know it and if you haven’t I refuse to spoil an amazing read. Bob Burg and John David Mann have created a seemingly simple story that has a richness and depth not found in many books. I know that when I re-read the book it seems as though someone has come and added words because I always learn something new or gain a fresh perspective.

It is important to list those Five Laws because together they deliver the philosophy of The Go-Giver in a step-by-step guide to stratospheric success.

Bob Burg and John David Mann and an amazing group of Go-Giver coaches – led by Master Coach Dixie Gillaspie – are committed to sharing the Go-Giver philosophy. We blog and speak and coach and write and host events to share the philosophy with all who are open to learning the simple key of giving.

While the Go-Giver ‘family’ is always available to help spread the book’s lessons – much can be learned simply by reading the book. It has sold over 250,000 copies worldwide. Countless businesses and individuals alike have learned – and prospered – by embracing its philosophy. They have discovered Pindar’s one word Trade Secret – giving.

So, to answer the first question – yes, The Go-Giver serves and delivers endless value. Yes is also the answer to the second question – it does indeed make money. Put this all together and there should be no question as to why The Go-Giver is this Friday’s Fearless Brand.

2 comments on “The Go-Giver”