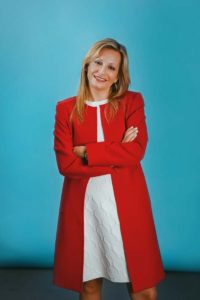 Few know better than Jumana Abu-Hannoud how big an impact growing up in a loving, caring, and giving family atmosphere can have on a person. She knows because that’s exactly the environment she enjoyed as a child. For Jumana, who was born and raised in Amman, Jordan, that type of attitude permeated her entire community.

It was her parents and grandparents who clearly had the biggest influence on a young Jumana. Not only was giving at their core – so was a tremendous work ethic. Jumana grew up in a family whose philosophy was ‘If you’re going to do something – do it to the best of your ability’.

It wasn’t surprising to anyone that by age eighteen, when Jumana decided she was going to get a job, she looked first at opportunities in Non-government Organizations, or NGO’s (in America the common terminology is not-for-profit organizations). Jumana took a volunteer intern position with the Noor Hussein Foundation, committed to developing education, art, and micro-financing programs for women.

Gifts often come at the least expected times and in the least expected forms. For Jumana, one such blessing was, at the age of nineteen and while still an intern, to connect with a mentor. From him she learned the basics of business professionalism. At the same time, he also bolstered her confidence, helped fuel her motivation, and reinforced her potential.

While a volunteer, Jumana attended college, earning a degree from the University of Jordan. At work, her enthusiasm, energy, and – most importantly – her results, did not go unnoticed. Jumana accepted a position on the staff of HRH Princess Haya Bint Al Hussein of Jordan. Serving initially as Communications Director, she was deeply involved in the strategy development and execution of several programs. These initiatives focused on health, education, social development, peace and humanitarian aid on a local, regional, and global basis. Eventually, she climbed to the position of Chief of Staff for HRH Princess Haya.

Since childhood, family has been at the very core of Jumana’s heart and soul. She was blessed to find a partner and husband, Yanal Sulieman, a man who offered her exactly what she needed – love, friendship, and complete willingness to empower and support her through all her endeavors. Jumana and Yanal are the extremely proud and passionate parents to two daughters.

Living and working in Dubai, Jumana continued her studies, graduating from the Wharton Executive Education program. She had also earned the designation of certified Chief Sustainability Officer from the International Leadership Management (ILM) organization in the UK.

Talented, educated, and more passionate than ever, Jumana welcomes every opportunity to serve others – accepting every challenge to do so. She was appointed by Royal Decree a Member of the Board of Directors of the International Humanitarian City, the largest humanitarian hub in the world, where she was tasked with its restructuring and transitional management for two years. Jumana also worked as a Public Information Officer for the United Nations High Commissioner for Refugees (UNHCR).

For three years, Jumana supported SOS International Children’s Villages, Gulf Area Office in a voluntary advisory capacity. SOS International Villages was founded by Hermann Gmeiner in Tyrol, Austria, in 1949. As a child welfare worker, Gmeiner saw how children orphaned as a result of World War II suffered. He was committed to helping them by building loving families and supportive communities.

That vision, the conviction that all children deserve a loving, family environment resonated powerfully with Jumana. It touched her so much, that she became the full-time Managing Director of the SOS Villages Gulf Area Office.

Jumana’s passion and energy also extends to women’s leadership, gender equity, woman empowerment, and mentoring. For these reasons, she is a Founding Partner of Reach Mentoring, the first non-profit organization dedicated to the development of female professionals in the Middle East. She is also a co-founder and Steering Committee member of the 30% Club GCC chapter, a collaborative platform for businesses and individuals to accelerate representation of women on boards and in senior executive positions.

Jumana, it seems, has a seemingly endless reserve of energy and passion. It’s her commitment to helping others that drives her. It’s no wonder that last year, she was named both Emirates Woman of the Year and Humanitarian of the Year. Jumana Abu-Hannoud is the epitome of a fearless brand.

Fearless Brands are fueled by passion, driven by purpose, and effective through persistence

Jumana Abu-Hannoud refers to herself as a career mother. She means that, first and foremost, in the literal sense. Her greatest satisfaction and joy are centered around her family. She, her husband, and her daughters cherish their time together – sharing music, laughter, and love. In a sense, she’s also a mother at her day job – nurturing, caring, empowering, teaching – giving.

For Jumana, there is no pretense of work/life balance – merely a fully integrated life. Her love, passion and identity are what she gets to do every day – all day. She draws her inspiration from the strength that people show during adversity – it forces her to reach deep for her own courage and determination.

There’s much to learn from fearless brands, and Jumana Abu-Hannoud is no exception. Here’s a list of three keys Jumana believes are key to finding true success and happiness in life.

Be true to yourself – do what you love – When making decisions about your life and your future, think long-term. Don’t allow short-term factors to influence you. Professionally, seek a career not a job – a culture not a company – a future not a role.

Don’t be afraid of failing – Failing isn’t necessarily a bad thing. From failure we learn, grow, flourish. Finding the true happiness we seek requires that we take risks. Taking risks will always result in failure to some degree. It’s the struggle which will lead to true success.

Be a catalyst for someone else – Being a champion for others’ success and growth is the most important thing you can do for your own success. For some, this will seem counter-intuitive – while others completely understand the power of consistently providing value to others – of being “other focused.” (To gain an even better understanding of this concept, I invite you to read one of my favorite books, The Go-Giver – better yet, read the entire series.)

Jumana Abu-Hannoud has touched tens-of-thousands of lives, directly and indirectly, through her tireless and passionate efforts. The results of her goodness can be seen in the communities in which she works and their extensive ripple effect . We, too, can have a similar impact. Ironically, even if our impact is measured on a smaller scale, we can realize happiness and success on a level equal to Jumana. Building a fearless brand yields tremendous results, for ourselves and for others.