Three Things Your Brand Can Learn From Mercedes-Benz

Karl’s mother was focused on his getting a great education. His father, a locomotive driver, died when Karl was two. At the age of fifteen he was accepted into the University of Karlsruhe where he earned a degree in mechanical engineering, graduating at the age of 19. After working in a variety of positions at several companies – none of which snared his attention and potential – he ended up at a bicycle repair shop. There he fervently pursued his vision of creating a horseless carriage.

Gottlieb, also born in Germany, was the son of a baker but he developed a love of engineering. He became a gunsmith at age 18; at 22 he was named foreman at a locomotive production company then moved on to study steam locomotives. His belief that steam power would be short lived led him to focus on creating small, simple, gas powered engines for light industrial use.

In 1886, Karl received a patent for what is considered the world’s first automobile – his three-wheeled ‘Velocipede’ known as a motor wagon. Later that same year, Gottlieb introduced his motor carriage – the world’s first four-wheeled auto. Both men were driven to market their inventions on an international scale and both continued to pursue innovation and improvement.

Karl’s innovations included speed control, ignition from battery generated sparks, spark plugs, the clutch and double-pivot steering. Perhaps one of the most crucial inventions which Gottlieb’s team developed was the spray-nozzle carburetor – a significant milestone in the automobile’s success. Both companies continued separately and with a focus on quality were able to survive the impact of the first World War and a dramatic increase in competition. Continued success, however, required larger units and economies of scale – so in 1926 the two companies agreed to merge.

Together. they weathered the economic impact of the Great Depression and the mandatory shift to produce military vehicles during World War II. When the war ended, the Potsdam Agreement resulted in the loss of all foreign affiliates, subsidiaries, branches – all assets were gone. The company adjusted their management make-up, quite willingly agreed to reparations and continued with an unyielding commitment to quality.

The company formed by the merger of two driven entrepreneurs – each realizing their vision in the same year – would go on to become a world leader in the luxury automobile market. With 48 models currently in production, the company sells over 1,500,000 units annually driving global sales of more than $98 billion. The brand itself is ranked as the 17th most valuable in the world ($23.8 billion) by Forbes. While these results would likely boggle the minds of Karl and Gottlieb, they are not what define a fearless brand. Mercedes-Benz has been built to be a fearless brand by keeping quality at their core and using innovation, style and speed to fuel their success.

Fearless Brands are driven to excel by combining quality with innovation.

Karl Benz and Gottlieb Daimler are generally regarded as the inventors of the automobile. While their initial development and design work was done separately, the merger of the two efforts into a single company would become a driving force in the automobile industry. Together they ‘fathered’ the Mercedes-Benz. (Mercedes was Gottlieb Daimler’s daughter’s name and his company’s most powerful brand.) The company slogan – “The best or nothing” – reflects the philosophy by which both Benz and Daimler had built their businesses so successfully.

It is said that a picture is worth a thousand words. The 1955 Mercedes Gullwing 300 SL – an icon of the automobile industry – may best capture the essence of the brand’s commitment to style, innovation and speed. 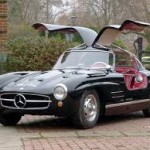 Style – many consider this to be one of the most beautiful cars ever made.

Speed – the fastest production car of its time with a top speed of 161 mph.

Innovation has been at the heart of Mercedes from its inception. Renowned engineer Wilhelm Maybach, designed a hybrid Mercedes in 1906. The Mixte as it was called, used a gasoline engine to produce electricity to power two rear hub motors. In 1985, Mercedes was the one of the first cars to incorporate a catalytic converter. The 1990’s saw a complete conversion to the use of fuel injection and the  development of superchargers. Mercedes was the first company to fit their cars with ABS and EPS brake technology.

From the Gullwing and the timeless beauty of the 1961 190 SL Roadster to today’s AMG GT and S class coupe, style is a mainstay with Mercedes. Speed too continues a priority as evidenced by Mercedes drivers Hamilton and Rosberg finishing 1-2 in the 2014 F-1 series.

As with all fearless brands, Mercedes-Benz has had its share of challenges and missteps along the way. World War II and their involvement with the German war effort dealt a near fatal blow. The oil crisis of the seventies – combined with the onslaught of Asian competitors – presented more difficulties. 1998 saw a merger with Chrysler Corporation – a mostly unsuccessful  initiative which ran its course and was dissolved by 2007.

Long-term success demands quality – From producing and selling luxury automobiles to creating a successful career path and everything in between – one thing is an absolute – long-term success demands quality. Anything less will reveal itself sooner rather than later and that lack of quality will undermine and eventually destroy any chance for success.

Innovation is a must – Innovate or stagnate. Merely maintaining the status quo is a risky proposition. Complacency is an enemy of success. Innovation translates to continued improvement and increased relevance for your brand.

Take risks – wisely – While improvement typically requires risk – risk doesn’t always yield expected returns. Daimlers’ merger with Chrysler was a calculated risk – one which made sense to the company at the time – yet it didn’t pan out. Rather than continue down that path, the company made the tough decision to ‘cut its losses’. To build your brand you must take calculated risks – the key is knowing whether to continue or pull the plug.

Not every vision will impact the entire world. Not every brand will be valued at over $25 billion. However, every brand can become a fearless brand. Embrace your passion as Karl and Gottlieb did from the very beginning. Continue to improve your skills and innovate to increase your value and broaden your relevance. It’s quite simple – just not easy. Strive to make your brand the best – or nothing.