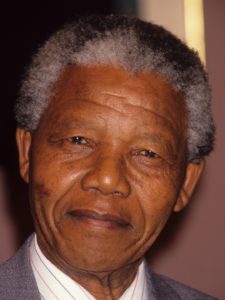 He is affectionately called Tata (Father) by millions of South Africans and is known as the Father of the Rainbow Nation. He has received hundreds of awards and honors including the U.S. Presidential Medal of Freedom and the Soviet Order of Lenin. In 1993 he won the Nobel Peace Prize. He is known internationally for his efforts to stop the race based segregation and discrimination of apartheid, colonialism and the human rights violations of an oppressive government.  To many he was a freedom fighter.

However, he was also a  seditious attorney committed to subversive and inflammatory behavior as a member of the African National Conference (ANC). His fight against oppression ultimately led to the use of violence and the death of innocent South African citizens. Convicted of sabotage, he was sentenced to life in prison and spent the next twenty-seven years incarcerated.

After eventually being released from prison, he was elected  the first black South African President – at the age of 76. Nelson Mandela – Madiba – is this Friday’s Fearless Brand. Is it because of his accomplishments? Well yes – and no. The authenticity and conviction Mandela has exhibited throughout his life are the essence of a fearless brand. What really drove the realization of his life’s work was much more than that.

Mandela’s own words reveal what that was – “As I walked out the door toward the gate that would lead to my freedom, I knew if I didn’t leave my bitterness and hatred behind, I’d still be in prison.”  He realized that the key to his future effectiveness was in his own hands. Acceptance. Forgiveness. Look forward – not back.

A fearless brand will focus on what they can control – they will manage their own brand.

Mr. Mandela was able to rise above the bitterness and hatred which he could have wallowed in when he was released from prison on February 11, 1990. This was after the then President FW de Klerk had relaxed apartheid laws and removed the ban on the ANC.  Upon his release Mandela acknowledged that Mr. de Klerk was a man of integrity, but said: “Our struggle has reached a decisive moment. Our march to freedom is irreversible.” He continued – “Now is the time to intensify the struggle on all fronts. To relax now would be a mistake which future generations would not forgive.”

After his release he was more committed than to lead the effort to abolish apartheid. He ran for president as the candidate for the ANC party. Leading up to the presidential elections he debated de Klerk. While most observers felt he lost that debate as a speaker, he won the respect and support of virtually everyone when he reached out and shook de Klerk’s hand. On 27 April, 1994 over 20,000,000 South Africans voted and Mandela was elected President. He and his party went about deconstructing apartheid by addressing practices which fostered racism, poverty, censorship and inequality.

Mandela’s choice to let go of any hatred or bitterness positioned him as a true statesman. Rather than spend time and energy living in the past he chose to move forward in peace and respect. His ability to ‘rise above’ allowed him to bring people together, to build a new government and begin a new foundation of fairness, respect and equality.

He retired from politics in 1999 but continued his activism. In 2004 he ‘retired from retirement’ and began a much more private and personal style of living. He is now 95 and is battling a variety of ailments and illness. He has been played in film by such legends as Sidney Poitier and Morgan Freeman (Invictus). Musicians honor him in song and dedication. The day he was elected has become a national holiday known as Freedom Day.

His life has not been perfect – nor has anyone’s for that matter. He no doubt has regrets in some facets of his life and some of his actions. However, what has to be focused on and embraced, is the power of conviction and the commitment which follows. The lesson to be learned here is this – we all can be fearless brands. It does not require reshaping a country, uniting a nation nor impacting the entire world. Our vision and our goals do not have to be the things of which legends are made and we certainly do not have to spend much of our adult life in prison.

However, we can certainly impact the world – the world in which we live, work and play.   We can find the inspiration we need to embrace our dreams. We can reach the level of conviction which will compel us and drive us to reach our vision. Of critical importance is to realize what we can control and not waste energy and time on those things which we cannot. If there is the least bit of doubt- all we have to do is look to fearless brands such as Nelson ‘Madiba’ Mandela and others – for their example.