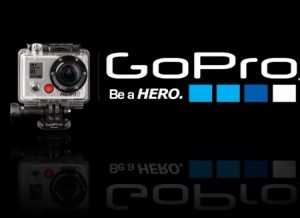 This ‘overnight success’ began as an idea over a decade ago. The concept was spawned from a desire to capture on film, the energy and excitement of one man’s passion. An avid surfer, he wanted photos to document the action of his 2002 surfing adventure in Australia and Indonesia. While it seemed simple in thought – it proved to be a near impossibility when it came to making it happen – at least without great expense and professional assistance. His solution was simple – create a wrist strap to hold a disposable camera against your arm. It would flip into place when the photo op presented itself, then snap back down.

He needed capital. He had some funds left from his first business which imploded when the dot com bubble burst but he had made a commitment to bootstrap his future entrepreneurial initiatives. In Bali, he and his then girlfriend (and now his wife), bought hundreds of belts for $1.95. Back in California,  they sold the belts out of a VW van for up to $60 each. With those funds, his savings, a $35,000 loan and a borrowed sewing machine they began product development.

As the concept began to materialize, there was a realization that it needed to be both the strap and a camera. The first generation product- a still shot 35mm camera -sold 100 units to a Japanese concern at a  2004 trade show. Within two years the product had evolved to very basic video digital camera. As the product evolved, so did his vision of where and how the camera could be used.

Another passion, auto racing, sparked development of vibration free mounts to allow the camera to be used on cars.  For testing purposes, he purchased a Lotus Exige. Extravagant? Yes – but bootstrapping allowed him to pursue his vision – while indulging another of his passions. The result was bringing a high definition video camera to market in 2009.

Attending trade show after trade show, sales began to take off. As the sales grew, so did the number of videos posted on various social media platforms. Videos showing actions and perspectives not seen before. It was that content which fueled what would become a sales explosion. More users created more uses. More uses fueled further product development to meet consumer interests – and in turn, more sales. Soon the big retailers who had ignored all earlier efforts to sell to them came calling.

The result today is one of the most successful new product launches ever. This performance is not what has created a fearless brand – rather, GoPro has been built into a fearless brand by the vision, drive and passion of its founder and CEO, Nicholas ‘Nick’ Woodman.

Fearless brands are built from vision, drive and passion.

Woodman’s original concept of a wrist camera has evolved into what can only be termed a phenomenon. The GoPro Hero camera is much more than just a product – it  documents individuals’ life experiences and allows unlimited sharing and communication online. GoPro Hero cameras are in use worldwide – not just by amateur videographers and adventurers – but also by professionals and uses too many to list. Sharing their life experiences has essentially made the users the company’s sales force – and that sales force has helped to build a quarter of a billion dollar company.

Woodman describes the entrepreneurial journey as entering a dark forest filled with scary things, plowing through and eventually coming out on the other side to the cheers of friends because you’re achieving your goals. Whether your business is a startup, an ongoing concern – or still a concept, there is much to learn from GoPro regarding branding and building a successful business.

Be relevant – Woodman’s vision of capturing images of his adventures translated directly to an immense population of people living active lifestyles. Most of them may not have realized they wanted videos which captured their lives, but they soon discovered there was a way to enhance their experiences. The product resonated with a huge group of adventurers.

Be authentic – Woodman was determined to bootstrap this pursuit because he wanted to do things his way without having to be accountable to venture capitalists or other investors. The obvious example is the purchase of the Lotus. This freedom allowed him to remain true to his vision. As the company grew in revenue and employees he realized it was critical to keep the company authentic as well. The offices are located close to surfing  and Woodman encourages his employees to continue their active lifestyles. He is keen on maintaining what he refers to as ‘cultural authenticity’.

Listen to your customers – being responsive to the voice of the consumer is seemingly obvious but too often overlooked. As customers’ videos are posted, comments sent in and ideas submitted – GoPro listens – and reacts. Products are investigated, created, altered and delivered based on customer input. It’s not surprising to see the success of GoPro line extensions and next generation cameras – it’s what the customers want.

Be aspirational – The name itself is a bold brand statement – GoPro. The original concept was to provide amateurs with a capability previously only available to professionals and people of wealth. Woodman’s product promised that the average person could GoPro – and promised to deliver the excellence that professionals demand. GoPro took the concept of being aspirational to another level when they named their cameras the HERO. The tagline GoPro – Be a Hero is pure genius.

As you look to build your company’s fearless brand – or your personal brand – ask yourself  these questions. Are you being true to your dream and to yourself? Are you listening to your customer and being relevant or are you charging ahead with your ideas because they are your ideas? How can I (we) do this better?

The success you will achieve by investing the time and effort in building your fearless brand will be greater than you might imagine. Embrace your dreams. Be authentic. Build your brand. Be a hero.

Embrace your dreams. Be authentic. Build your brand. Be a hero.