Building a Brand With PURPOSE 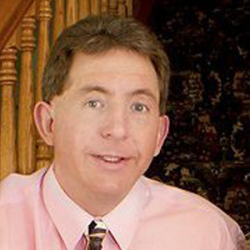 There were some very noteworthy events in 1966 – the U.S. began an aggressive escalation of military in Vietnam while anti-war protests grew exponentially, Indira Ghandi visited the U.S., the Miranda warning became law, Surveyor 1 landed on the moon while Gemini 9 allowed Gene Cernan to become the second man to walk in space,  St. Louis saw the opening of Busch Stadium and the dedication of the Gateway Arch, Sweet Charity opened on Broadway and Walt Disney died while producing The Jungle Book.

Meanwhile that year, a seemingly insignificant event occurred – a young couple in Chicago welcomed the first of their three sons into the world.  His father worked in a factory by day, went to school at night, ultimately earning an accounting degree and becoming a CPA.  His mother worked at night, so the boy would take care of his brothers and the family home, making him feel old beyond his years. Lack of interest and effort in fifth grade resulted in a slew of “D’s” on a report card which began a nightly lecture from his father – “Study hard, work hard or you will become a ditch digger.” He learned that hard work is what it took to achieve the results he wanted.

His dad was the oldest of thirteen kids while his mom was one of the youngest of fourteen. With twenty-four aunts and uncles, the boy was exposed to a wide variety of life experiences. His extended family included veterans from World War II, military men active in the Vietnam war, factory workers, homemakers, and working women. He witnessed the spoils of hard work and good decisions as well as the disappointments of wrong choices and actions not taken. He learned to fear regret.

His teen dream of being a sports star morphed into becoming a doctor which, in turn, led to pharmaceutical school. He didn’t have a vision or plan for his life – but he knew that being a pharmacist would pay well and that the work would stay at the office when his shift ended. At Drake University, it became readily apparent that courses such as chemistry and biopharmaceutical science held little interest for his friends.  To stay engaged and hold their interest, he began to ask questions – to be genuinely interested in others. His gift was not superstar athleticism,  but relating to people at a world-class level. He learned that our gifts are what they are and that makes each of us uniquely valuable in our own way.

His gift fit perfectly with his vision of a pharmacist – knowledgeable, caring and empathetic.  He provided incredible customer service, set business records and was named Wal-Mart pharmacist of the year. His boss said “Whatever you’re doing – keep it up.” His next boss was focused on numbers and operational considerations – not customer relations. The award winning pharmacist got down on himself, questioned his purpose and created a vision of his losing everything – a truly lousy story.

However, he soon remembered his father’s lesson of hard work, the fear of regret learned from his family and his own realization that ‘our gifts are what they are.” He refused to allow his own ‘lousy story’ to become a reality. He finally had total clarity of his life purpose – helping others to achieve their best. His first book was We Are Not Here on Rehearsal which barely sold. Not discouraged, he committed to learn from the very best how to strengthen his message and deliver it effectively. He studied directly with John Maxwell and Bob Burg becoming a Certified Leadership coach, a Certified Go-Giver Speaker and Coach and a Reinvention Specialist. He has since authored his second book P.U.R.P.O.S.E. The Prescription for Sanity and created a corresponding coaching course for the same. His next book is in the works and is titled What a Lousy Story. While still a highly respected pharmacist, he has also become a highly sought after coach and speaker. None of these accomplishments are what qualify him as a fearless brand – rather all of this has become reality because Corey Jahnke has built his own fearless brand.

Corey Jahnke is truly a character – he will say the unexpected, see what others miss and cares more about his message than what some others might think of his style. He is genuine, passionate and skilled – what he doesn’t know, he learns. Those are the attributes of a fearless brand. Jahnke’s core strength might just be building relationships by delivering superior customer service. For Corey, customer service would be better termed ‘people service’ – he sees people as his ‘customer’. His purpose is to help others see the opportunities in their lives and get past their own lousy stories (as he did his own) and realize the success they desire.

Corey constantly and consistently embraces the positives in life while sharing his philosophy of success through relationships, leadership and service. Bob Burg refers to him as the Zen Pharmacist. While Jahnke is a passionately positive and hard working person, he has his flaws, his imperfections, his hidden warts and his challenges just as we all do. However, there is much to learn from him about the successful results of building one’s fearless brand.

Be true to yourself – Our gifts are what they are – they are what make us unique and special. One of the hardest things in life is striving to be something we’re not. Discover – and embrace – your gifts.

G.R.O.W. – GROW is a Jahnke formula to achieve success Goals – Reality – Obstacles – Way forward. Identify your goals, do a reality check, identify and demolish obstacles and find the way forward. This one is simple – though not always easy. It will, however, always lead to success.

His birth may have seemed insignificant in 1966 – but the impact Corey Jahnke is having today in the lives of thousands is anything but. Very few of us will obtain superstar status in life. What we can do is learn from Corey’s example – embrace and fulfill our purpose, build our fearless brand and achieve stratospheric success.

10 comments on “Building a Brand With PURPOSE”