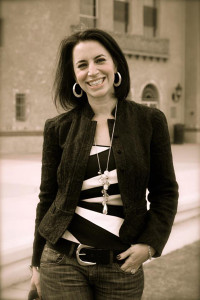 Do you know someone who is always busy? The kind of person that actually makes you a bit tired just by hearing about all their activities and interests and such? If you do, this Friday’s Fearless Brand will remind you of them – at least to a degree. If you don’t know someone like that, you’re about to. Meet Dafna Michaelson Jenet. She first and foremost is a mother and a wife. She’s been married for two years to Michael Jenet. Between them they have three children along with all of the activity and chaos that entails. On top of that she is a speaker, a teacher, a storyteller, an author, a radio host, a blogger and a non-profit leader.

If you’ve been following this series, you’ll not be surprised at this statement. None of that is what makes her a fearless brand – all of her activities, her accolades and her accomplishments are the result of her being a fearless brand. This blog is rather long – too long for some – so here’s the essence of today’s message –

A fearless brand is built on a platform of authenticity – derived from clarity – resulting in conviction.

Dafna adds transparency to this ‘formula’ which increases her impact exponentially. It is her conviction that has allowed Dafna to pursue her vision of changing the world by building community. The way she defines this is “Changing the mirror we use that reflects who we are as a society”. This sounds like a fairly ambitious and lofty ambition…one which drew great skepticism  from many – at least early on. It is her transparency that allows her vision to touch literally tens of thousands of people – providing hope, strength, optimism and a sense of community.

I first met Dafna in 2009 when she was in St. Louis as part of the Missouri leg of her 50 in 52 Project. As a single mother of two she came to realize that her professional path at the time was not what she her calling. The work she was doing wasn’t her vision. Here’s where conviction becomes a driving force in her life. Realizing that she needed to be authentic in her life’s pursuits, she quit her job, cashed in her 401K and set off to visit each of the fifty United States – in one year. Her purpose was to find the individuals that were at the core of moving America forward. The unknown, unheralded people that were the soul of our country. Each weekend for a year, with the support of her then boyfriend Michael, she visited a different state discovering amazing stories of people making a difference in their community.

The next time we were together was at the Extreme Business Makeover conference in Orlando. At that time Dafna was planning her book and speaking engagements to deliver the results from her journey. As an aside, she also tweeted that entire conference almost verbatim which taught me a terrific social media tool – the magic of ‘retweeting’.

Then life threw another challenge her way. Dafna was diagnosed with breast cancer. This was a journey no one wants to take yet one that thousands face every year. Dafna determined that the best thing for her was to share her experience to help others as well as herself. She began a blog. She shared the progression of her condition, her treatments, the double mastectomy, the resulting complications and her ultimate victory over the disease.

During that time she continued to travel and to speak. She started a radio show in Denver. She was the driving force behind the creation of TEDxCrestmoorPark. She also joined a mastermind group which I was a part of and we became accountability partners.

Since then she has gotten married and renewed her efforts at The Journey Institute. She has developed a white paper on her next big vision which she calls Love Thy Neighbor. She still teaches social media at MSU Denver, is very active in her faith on a national level and seemingly never runs out of energy.

This year, at the age of forty, she became pregnant. She and Michael were to have their own child – their little Peanut. An amazing dream come true which resulted in boundless joy for them and for so many. She began to share her experience of what it was like to be expecting at forty – primarily to help other women.

I cannot begin to imagine the anguish and pain and shock that Dafna and Michael experienced when at fifteen weeks they lost Peanut. Very few people can. There are so many more questions than answers for parents and family at a time like that. Once again, Dafna determined that she had to be both authentic – and transparent. She began to blog about Peanut – the baby never born. She wrote for herself – but she wrote for countless parents and siblings who suffer the loss of a baby and have no place really to turn.

She determined that Peanut’s life need not be in vain. To spread hope and help and to be true to her vision of building community she and Michael are creating The Peanut Project. This initiative will provide information and education, a call center, clergy and non-faith based services to those in need.

Dafna is as authentic as one can be. She is more transparent than most could ever be. Her conviction is to help build a better world one person – one community at a time. As I told her, she is using her fearless brand to help our society become a fearless brand as well.