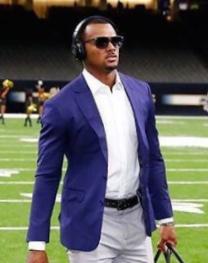 An oft overlooked quality of a great leader is their willingness to first be led – to be inspired before inspiring others – to be teachable before showing the way.

There’s no better example of that trait than Houston Texans quarterback, Deshaun Watson. In his second National Football League season, the twenty-three-year-old led his team to the playoffs, winning the AFC South division. Two things make that accomplishment surprising.

First, Deshaun Watson suffered a major knee injury in the middle of the 2017 season, leaving many so-called experts questioning if he would even have healed enough to play this year. He did. Secondly, the Texans finished dead last in their division last year, few gave them a legitimate shot at finishing first this year. They did.

It’s obvious to those who watch Watson play that he is a highly talented athlete – one who consistently makes brilliant plays and accurate on-field decisions. Deshaun Watson’s physical and mental skills are only surpassed by his leadership skills.

Know this – Deshaun Watson’s road to success has not been an easy one. His life’s journey includes poverty, personal sacrifice, hard work, tragedy, and commitment.

Born and raised in Gainesville, Georgia, Deshaun and his three siblings was raised by their single mother, Deann Watson. As a boy, Deshaun had no father figure in his life. Deann worked multiple jobs to support her children and volunteered hundreds of hours to Habitat for Humanity. Deann herself eventually qualified for a Habitat home, funded through the charity of professional football player Warrick Dunn. Deshaun was eleven-years-old.

He played football and basketball with the kids in his neighborhood, and dreamed of playing basketball at Duke University. In a move that surprised everyone, Deshaun was named the starting quarterback as a fourteen-year-old freshman at Gainesville High School. The projected starter was a junior with two years’ experience, but the coach, Bruce Miller, had seen something special in Watson.

Watson led the team to one of its best-ever records. After his first season, the team hired a new quarterback coach, Michael Perry. At the same time, his mother was diagnosed with tongue cancer. She was forced to move to Atlanta for treatment, leaving her kids in the care of their aunt.

Coach Perry told Watson that he needed a work ethic to match his physical talent. Perry instilled that ethic in Watson by working him hard – as Watson puts it: “He worked my ass off!” Thinking of his mother fighting cancer in Atlanta gave Deshaun the motivation to remain committed to the work ethic he was developing.

Watson credits Perry with transforming him from a football player to a quarterback. He kept Deshaun focused on his education, got him closer to God, and showed him how to be a man. For his part, as Watson grew as a player and a man, he was instrumental in transforming the team’s identity, eventually leading Gainesville to their first-ever state championship.

At the same time his mother was diagnosed and he got a new coach, Watson was offered a football scholarship by Dabo Swinney, the head coach of Clemson University. Even though he wasn’t eligible for college for several years, Swinney made a powerful impression on Watson, who decided that Clemson is where he would play his collegiate football.

Deshaun Watson could barely believe his opportunity. The scholarship would provide a free education – relieving a tremendous burden from his mother – and he would be in a position to potentially play in the National Football League.

Watson realized that with great opportunity comes great responsibility. He worked hard in high school to graduate a semester early allowing him to enroll at Clemson early. Once there, he met Maria Herbst, an academic adviser. He told her that he wanted to graduate in three years, not the traditional four.

Much like Coach Perry in high school, Herbst told Watson he’d have to have a strong work ethic to achieve his goal. With her guidance, Coach Swinney’s dedication to his player’s education and Watson’s own commitment, he accomplished his goal of an early diploma.

He also had goals on the football field. As a sophomore, he led the Clemson Tigers to the National Championship game against perennial powerhouse, Alabama. Clemson fell short in that game – a loss that could have crushed the hopes of many a player. Not Deshaun Watson, however.

Instead, he took to heart a message he received from Cam Newton, an NFL quarterback who had led Auburn University to the national championship when he was in college. Watson had attended a camp that Newton sponsored – the two quarterbacks struck up a friendship. The message? Don’t let the highs get too high and don’t let the lows get too low. Accept the bad equally the good, accept your fans and your detractors. Simply put, stay in balance.

Watson did exactly that and the following year he led Clemson to an upset victory over the Alabama Crimson Tide to claim the national championship. He had transformed another team from a good program to a championship program.

Having both earned his degree and won the college football championship in three years, Deshaun declared for the NFL draft. Many teams showed an interest, including the Houston Texans. On a pre-draft visit to their facility, Watson, sat by himself in the cafeteria to have lunch. Before long, a crowd of over twenty players had joined Watson. Seeing how the players were drawn to Watson, noting that it was a matter of attraction not promotion, led the team management to realize what a special person Deshaun Watson was – both as a football player and as a leader.

The team drafted Watson and, as stated earlier, the Texans are in the playoffs in his second year. Deshaun Watson is transforming another team by his example. His work ethic, his conviction, his talent, and his leadership all combine to elevate the entire team.

What can we learn from a twenty-three-year-old professional quarterback? Plenty!

Remain teachable – Throughout his life, Deshaun Watson has been open to learning from people who both know more than he and have his best interests at heart. With his natural talent, Watson could easily have dismissed the input and drive that Coach Perry gave him. He could have made his education a low priority as he was almost certain to become a highly paid professional athlete. Instead, he remained teachable at all levels in all situations. The result? He’s become more talented, more knowledgeable and a better leader.

Confidence and humility are not mutually exclusive – Watson is completely confident in his ability – that fact is very clear if you hear him talk. At the same time, he’s humble in a way very few athletes and celebrities are. Perhaps the greatest example of his humility is when his high school team won the state championship, Watson stayed in the crowd rather that join the team in front of the cameras. His reasoning? It’s not my time. His coach had no idea until he saw the newspaper the next day. His coach was not surprised. It’s great to be self-assured – it’s even more impressive to do so with humility.

Be thankful, give back more than you receive – Deshaun Watson is very aware of how much he’s been given in life. A loving, dedicated mother, natural talent, dedicated coaches, a committed academic adviser, support from other athletes, financial freedom, and more. He wants to help kids as he was helped. He wants to mentor young athletes as he’s been mentored. He wants to lead his team and the city of Houston to a Super Bowl victory. He puts it this way: “I want to leave a legacy on the field. I do. I want to be remembered as a great teammate. As a hard worker. As a winner. But if I’m not, and the only thing people remember about me is that I was somebody who gave back everything he’d received from others, and more? I’d be O.K. with that, too.”

Whether you follow football or not, don’t be surprised to hear that Deshaun Watson has led the Houston Texans to a Super Bowl victory within the next year or so. While Watson’s life may seem completely different to yours, I urge you to look at the traits that have led to his success – they have made him a fearless brand. Hard work. Humble confidence. Giving great value to others. We all have the opportunity to do the same and achieve great success as a fearless brand in our own right.