Want to Elevate Your Brand? – Build a Better Burger 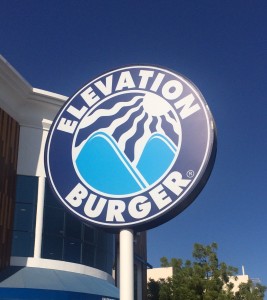 Countless factors combine to make us who we are as humans – too many for most of us to fathom. For Hans Hess, born and raised in Carmel, California, two of those things have had quite an impact. First, his parents stressed the importance of caring for the Earth and the environment – responsibility, conservation, sustainability. Secondly, he shared a sort of mission with his mother – they were on an endless quest to find the perfect hamburger.

They would try the burgers anywhere – everywhere. They ordered burgers once at a truck stop while on a family trip. The dad, who did not share this burger craving, openly wondered whether so much burger consumption would lead to any potential health issues, ironically as he ordered chicken fried steak :). The fascination with burgers continued, even as Hans went on to study physics at Cal Poly Institute.

His studies in physics taught him how to deal with complexity through analysis. While a student, he worked at the call center for Delta Airlines – where he learned how to deal with people, many of whom were often upset. He also learned to respect the employees who were often the brunt of customer ire for merely by doing their jobs. Next, he earned a masters in Christian theology in Dallas prior to moving to Washington D.C. to become an aide to a Congressman from Michigan. In that role, he had read a report  which would have a big impact on him and his future. It detailed the negative impact to humans resulting from the use of antibiotics and hormones in livestock -as did the pesticides used in agriculture.

In that role, he had also developed an interest in real estate – eventually leaving politics to become an analyst at a real estate firm. Prior to all of these positions however, he had contemplated taking a mission trip to Siberia. He ultimately realized that was not his calling – yet his unyielding urge to live with an expression of his faith continued.

In 2002, he met and married Ann – a Texas girl who had gone to Wake Forest University and was a bank consultant and then in the wealth management group at J. P. Morgan. As they panned their life and a family, Hans realized that his quest to find the perfect burger was still a passion. The couple’s discussion of “Why won’t someone create a better burger?” turned to “Why don’t we do it?”

It became clear to Hans that he had uncovered a way to combine three of the most important aspects of his life. Burgers – Hess could create his own perfect burger – he certainly knew what that would be. Friend to the Earth – He would use only sustainable ingredients, be energy efficient, recycle. Faith – His care for the Earth and healthier, affordable food options would be a form of stewardship.

With that as their vision , Hans and Ann began researching, planning and developing both the product and the concept. They would focus on the fast food industry model but with a primary focus on ingredients rather than low cost. After all, their primary mission was to elevate the burger experience. Three years later they opened their first restaurant in Arlington, VA.

The burgers were, as expected, a big hit – but what about the full menu? Customers found french fries cooked exclusively in olive oil, cookies baked fresh in store using organic flour and butter. All burgers were cooked to order – no pre-cooked meat, no heat lamps. While this approach would take a bit longer than the traditional fast food chains – the wait time would be predictable and the fresh quality would be an acceptable trade-0ff.

Moms found an affordable way to feed their children a healthier alternative – the kids loved the food. People with a desire for quality organic food now had another choice. The word spread – about the burgers, the fries and the restaurant’s philosophy – but also about the incredibly thick, delicious shakes available.

What started as a childhood fascination with finding the best burger has now grown into an international chain of restaurants. While Hans and Ann did not create a new category, they are responsible for its name  – the ‘better burger’ segment. There are 40+ locations both in the U.S. and the Middle East. That number is growing each year, primarily through franchising – at a minimum investment of $500,000 per unit.

The business success has been realized because every aspect of its development was intended to make Elevation Burger a fearless brand.

Hans and Ann Hess founded Elevation Burger to make a better burger, to deliver healthier fast food, to create a guest-oriented business which gives back to the community – and the Earth – in a tangible way. They judge their bottom line on three criteria – people, planet and profit.

Delivering a healthy, great tasting burger is at the core of Elevation’s success. It’s what brings customers – people – in to the restaurants. Customers receive a quality product at a fair price. The people who work for Elevation receive benefits, salaries and cross-training in all positions in a store. The people committed to organic farming and livestock clearly benefit.

The planet benefits by Elevation promoting a more natural ‘life cycle’ and its extensive efforts to be energy efficient and Earth friendly. It’s important to point out that this is a life commitment – not just a business tactic. Not only do Hans and Ann each drive a Prius – Hess began a taxi company – EnviroCab – which uses only hybrid cars.

Financial profits are a priority – as they are in any successful business. The key for Elevation Burger is to achieve optimum bottom line profits while remaining 100% committed to the principles upon which they founded the company.

Ingredients matter – Yes, that is the slogan for Elevation Burger and it literally refers to the ingredients in their food. However, it also holds true for the ingredients which comprise your brand. Your brand must be authentic and genuine – built based on the highest of skills – fueled by your vision and most importantly – relevant to your customers.

There may not be an Elevation Burger restaurant in your town – but its essence that defines the company can be found anywhere. Think of your brand the way Hess thought of his burger, asking yourself three questions:

If the answers are yes – you’re well on your way to elevating your own brand. If any of the answers are no – there’s work to be done. Seek advice and counsel from a knowledgeable, proven and trusted source. Take the necessary action to turn each of your answers in to a yes. Just like the Hess’ better burger – you’ll have a better brand.