She Used Education to Impact the Lives of Millions 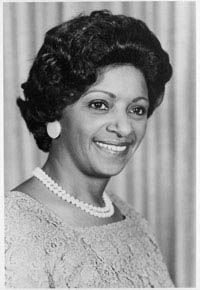 Some people are the product of their environment, others become successful in spite of it. Elizabeth Duncan Koontz did both. The youngest of seven children, Elizabeth was born on June 3, 1919 in Salisbury, North Carolina. Her parents were both educators – her father a high school principal, her mother a teacher.

In spite of some of the difficulties they faced, Elizabeth’s parents focused on their children’s education. Elizabeth had learned to read and write by the time she was seven years of age. Those skills served her well as she went through the segregated school system of Salisbury, where she eventually graduated salutatorian from her high school.

Her parents taught all of the children that if you were privileged to have an education you were also obligated to be of service. Elizabeth witnessed first-hand her mother putting those words into action. Away from her job at school, Elizabeth’s mother taught illiterate adults to read and write at her kitchen table. While helping her mother with those efforts, Elizabeth realized that teaching was her calling.

She went on to graduate from Livingston University – as did all seven of the siblings – before earning her master’s degree from Atlanta University in 1941. Through the years, she would also complete classes at Columbia University, North Carolina College, and the University of Indiana.

Her career began with her teaching fourth grade. She quickly shifted her focus to special education, teaching kids with disabilities. Elizabeth’s interests went beyond classroom – she chose to become active in organizations committed to supporting teachers and education in general. At the North Carolina state level, Koontz worked to ease racial tensions. She played a significant role in creation of the N.C. Association of Educators, an organization whose purpose was to bring black and white teachers together in the pursuit of common goals.

Elizabeth’s involvement in teachers’ organizations led her to participation in the National Education Association (NEA) where she became president of its Association of Classroom Teachers.

In 1968, she was elected president of the NEA – the first African-American to hold that position.  In her acceptance speech, under the theme of “A time for Educational Statesmanship”, she called on teachers “to make use of their united power to bring about change…that educators … men and women … young and old … black and white … stand together.” One notable action as president was the creation of the Human and Civil Rights Division of the NEA – responsible for a variety of issues affecting minority education.

In 1969, President Nixon appointed Koontz to head the United States Department of Labor’s Women’s Bureau. In that position, she became the highest ranking African-American member of the Nixon administration, as well as being one of the few liberal Democrats.

Throughout her career, Koontz had been championing equal rights and opportunities for blacks, women, and the working poor. Her position in the Labor Department afforded her a position of greater influence. She used that influence to get the Labor Department to reverse its stand against the Equal Rights Amendment – also working to convince insurance companies to broaden their interpretation of certain coverage.

One of her most passionate efforts was to dispel the concept of “women’s work” – believing that such labels limited women’s potential. She sought to make women aware that they could be more than a secretary, nurse, or teacher – that there was a full range of occupations from which they could choose.

That concern extended to blacks and other minorities as well. While many white women lamented being limited to the role of secretary, blacks bemoaned not having a chance for such a position. For Koontz, the issue went beyond race and gender. She pushed to eliminate a broad array of job stereotypes – seeking greater opportunities for anyone who chose to pursue them.

Elizabeth Duncan Koontz had a tremendous impact on education and improved racial relations. She not only opened doors for a variety of jobs – she opened countless minds. Koontz didn’t allow her humble beginnings and racial bias hold her back. Rather, she embraced her love of education, recognized her purpose as a teacher (in the broadest of senses), and was persistent in the pursuit of her goals. Simply put, Elizabeth Duncan Koontz was a fearless brand.

She left government at the end of Nixon’s first administration – returning to her home state of North Carolina. There, she worked as an assistant state superintendent of instruction for another decade.

Koontz is a relative unknown as far as notable public figures go. However, her impact has been far-reaching, albeit difficult to quantify.

Even so, there’s a great deal that we can learn from this lifelong teacher, this champion of women, blacks, and the working poor?

Broaden your thinking – substitute curiosity in place of judgement

A great deal of discrimination is so subtle as to be invisible. To recognize it, we must be able to broaden our thinking and challenge our assumptions. Koontz would often tell this story to make her point.

A boy injured in a traffic accident was rushed into the operating room. The surgeon on call scrubbed up, came in, took a look at the boy and said, “I can’t operate. That’s my son.”

The surgeon was not the boy’s father, but the statement was correct nonetheless. How could that be?

If you couldn’t figure it out, Elizabeth Koontz once said, you were living proof that the women’s movement still has a way to go. Why would you assume the surgeon is a man?

While you’re at it, did you also picture him as white?

The idea of thinking in a broader – more curious manner – certainly holds true regarding race and gender. However, it’s not limited to those situations. Broadening our thinking – being more curious – will lead to greater understanding in every scenario we encounter.

Complete integration must be the goal – Education is the key

Elizabeth Duncan Koontz authored an in-depth article for the August, 1970 issue of Ebony magazine. (Read it here) In it, she makes a very compelling case regarding the benefit of integration and the pitfalls of pursuing separatism. The need for integration is as valid today as in 1970 when Koontz wrote this piece.

For me, the greater take-away from this article is the importance of education. Learning – understanding – is our best hope to eliminate intense conflict. It’s critical to realize that understanding does not, necessarily, demand agreement. Understanding will allow us to find a reasonable resolution to our issues be they race, gender, business, relationship – any situation.

Elizabeth Duncan Koontz was determined, passionate, and knowledgeable about her positions. Many times, she was referred to as radical, yet she was, by all accounts, a soft-spoken, reasonable voice for her cause. Education was her path to success and significance.

We too can achieve success, happiness, and significance by following Elizabeth’s path. We can all become better educated. All of us can broaden our thinking. Each one of us can enjoy the results of building a fearless brand.