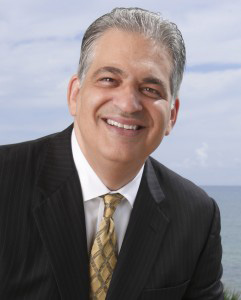 To many he is known as “Mr. Go-Giver”. Together with John David Mann, he co-authored The Go-Giver, an international best-selling book. In it, they put forth the premise that focusing on giving – vs getting – is a profitable way to live. His first book, Endless Referrals, demonstrates how to build business by developing meaningful relationships. Next week – October 31st – marks the release of  his next major book Adversaries Into Allies. This book delivers a proven framework to effectively influence others by taking their needs and interests into account.

What do these three books have in common? The most notable thread is the author – Bob Burg. Second is the general theme of the books – the philosophy of putting other people’s interests first. To know Bob is to know a man who is consistently focused on others. Importantly, he is completely authentic in this philosophy. That he is authentic and consistent is what makes Bob a fearless brand.

A fearless brand is consistently authentic – and authentically consistent.

Through the years Bob has become known as someone who puts his initial emphasis on the other person’s interests and needs. This is a theme throughout his writings, his talks, his blogs, his social media and his in-person interactions. His approach to connecting is what I refer to as being first interested and then being interesting.

The first time I ever experienced Bob was at a talk he was giving in St. Louis. I met him very briefly as he engaged with many of the event participants prior to its official start. Once he was introduced to the crowd of several hundred he asked each person whom he had met that morning to stand up. About forty people stood. He asked them to sit once he acknowledged them. With that Bob began to name those people by last name. One by one they sat. Of the forty or so people he only had to ask for assistance from three individuals. Was this a gimmick? Many people would think so, however, it is a talent – a skill practiced and honed through years of work and effort.

Why would Bob invest so much time learning this skill? Simple, Bob genuinely cares about others. He knows that having someone remember your name is something which we all value. Therein lies the key to Bob’s success not just as a professional but as a person. He is authentic – and he is consistent in his authenticity.

A lesson to learn from Bob is that for a brand to be successful – be it a person, product, service or a company – it must first be authentic. The second most important factor is to be consistent. This seems like a very simple formula for a brand to be successful. Yet countless people, companies and products try to be something they’re not. They are inconsistent in how they position themselves and how they interact. The worst possible scenario is to be both inauthentic and inconsistent.

Bob is very active in social media primarily via his blog, Twitter and Facebook. Regardless of his travel, meetings, talks or other activities on his schedule, he acknowledges every single engagement.  Why? Again, a simple answer. It is merely an ingrained part of Bob’s essence to value other people. His replies are genuine. His responding is consistent.

Yet another example of Bob’s authenticity is this. He is very quick to point out that he does experience fear. However, as detailed in my blog on Fear, it is how he embraces that fear and turns it into positive energy that helps make him a fearless brand. Ironic, isn’t it?

I have had the pleasure to be with Bob on a couple of private situations – in his ‘personal space’. Guess what – he was exactly the same in those instances as he is when he is in the public eye.

Bob is a terrific example of how simple – yet not always so easy – it is to be a fearless brand. Be consistently authentic. Be authentically consistent.

I invite you to share examples of brands – yours or others – which demonstrate authenticity and consistency. I look forward to your questions and comments.

Hint – to get a sneak peek of the powerful new book Adversaries Into Allies, click here and download a free chapter! You’ll thank me. More importantly, you’ll thank Bob. I promise.