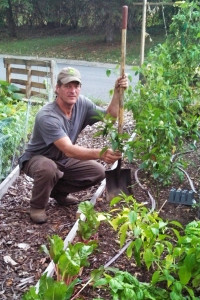 In the past two weeks Friday’s Fearless Brands have both been well known and delivered far reaching impact.  ‘Madiba’ – Nelson Mandela – united a sorely divided country. His efforts reached well beyond geographic boundaries and touched the entire world. The Go-Giver philosophy of shifting one’s focus from getting to giving has touched millions, resulting in countless people living not just a nicer life but a more profitable life as well.

This Friday’s Fearless Brand is making an impact in the world albeit on a smaller scale. His commitment to provide value to others by recognizing their interests and needs has driven him for years. Meet Bruce Clithero. When I first met Bruce, just a few years ago, he was working in IT for one of the nation’s largest financial advisory firms. Today he is an organic urban farmer here in St. Louis.

Fearless brands embrace life as a journey – continually working to discover and deliver their greatest value.

Bruce is an example of exactly that. How he has become an urban farmer is  an interesting  story. He was born in the country and raised on a farm. Not surprisingly, when the time was right he moved to the city. This transition from country living to city living is a fairly common occurrence. The ‘big city’ is alluring with its promise of excitement and opportunity not attainable on the farm.

Bruce’s story is not necessarily unique. He worked, made friends and adapted to city life. Along the way he got married and had two beautiful children. Eventually he ended up in an office job in that financial corporation’s headquarters. It became clear to him that this was not a situation for him. He realized that he worked for a fine company and made good money. However, the job was not fulfilling his needs and wants. He knew he needed to get out of an office environment as a starter. He is driven to serve others. Importantly he needed to follow his entrepreneurial spirit.

At a social event he heard several people mentioning how they wished they had a ‘go to person’ for any number of tasks. His interest was piqued and he saw a business opportunity. Facing his fears he left corporate life and started a personal services company where he was known as ‘the St. Louis Concierge Guy’.  Bruce became the resource for people who needed something done which they didn’t have the time, expertise or desire to do themselves.

After a year or so he realized that he loved most everything about his business – with the significant exception of not being at all interested in the tasks themselves. He loved helping people, improving their lives – making a difference. At the same time his interest in eating healthier and in creating a cleaner environment became even stronger. His farmer’s roots (yep, I did that :)) emerged. He began to learn about urban farming and his passions were ignited once again.

Your brand is your promise to the public – your value proposition. When you can live and work where your passions and competencies intersect you are able to deliver amazing value. Add relevance and that becomes your maximum value.

Branding is a process. Time and experience provide insights, lessons and a clarity which shape and refine one’s brand. What we can learn from Bruce’s story is this – our circumstances often are merely stepping stones on life’s journey. They are bridges on the path we choose to follow. If we remain open to new thinking, embrace our passions, improve our competencies and have the courage to act we deliver more value – both to ourselves and to those we will serve.

Bruce has embraced life’s journey and how his value impacts the world around him. He is serving people, making a positive impact on the environment. As a result, I look forward to enjoying some incredible organic tomatoes and fresh basil – sure to be among the tastiest in St. Louis.