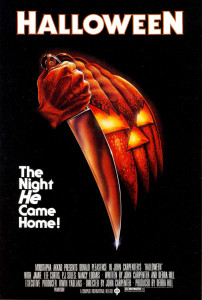 On Halloween night in 1963 a six year old boy killed his sister with a kitchen knife. Fifteen years later that boy escaped from the psychiatric hospital he had been committed to and headed back to his hometown of Haddonfield, IL.  There he began stalking a teenage girl and her friends. His psychiatrist anticipated his behavior and followed him to the town in an effort to prevent any more killing.

The entire concept sounds horrific – terrifying – evil. Well, it was all that and more. It’s a story that continues to fascinate and frighten – to tantalize and terrify – to seduce and startle. It is that story which is this Fridays Fearless Brand – the 1978 movie Halloween. To some it’s either ironic or surprising that a movie which has created so much fear over the past thirty-five years has been selected as my Friday’s Fearless Brand…but it shouldn’t be.

As detailed in an earlier blog, FEAR itself is a fearless brand. Neither experiencing fear – nor creating fear – determines a fearless brand. The key to a Fearless Brand is outlined in the initial post of this series – It Starts With You. Factors include being authentic, achieving clarity, and delivering your true value proposition. I define your value proposition as living in that area where your competency and your passion intersect. Halloween is this week’s selection because it demonstrates so well the secret ingredient to achieve maximum value. Here it is – to be successful, your value proposition has to pass what I call the “So what? test”. It has to be relevant.

A fearless brands’ value proposition is relevant to those they serve.

The original Halloween movie earned $70 million at the box office – about $250 million in today’s dollars. The movie is considered to have set the standard for the American slasher genre and has resulted in a Halloween movie franchise totaling ten films. It has clearly been wildly successful….which seems to have happened against all odds. The movie was produced on a tiny budget of $325,000. The director and co-writer was a relative unknown thirty year old by the name of John Carpenter. The cast, led by Jamie Lee Curtis and Donald Pleasence, was a group of relative unknowns at that time.

In a recent interview Carpenter was asked why he believed the movie had sustained its success for so long. His response was that he couldn’t say why. I believe the answer is this. Relevance.

Carpenter was tasked with writing a screenplay about a killer stalking babysitters to be titled rather literally – The Babysitter Murders.  His passion was to make movies – good movies. His competency came from training and from having directed two very challenging films. Almost inexplicably, he was given total creative freedom. Needless to say, this was a project he embraced with great fervor.

The title he had been saddled with was not very appealing – not very ‘sexy’ to horror film fans. His co-writer and producer, Debra Hill, came up with the name change to Halloween – the perfect name and one they were surprised had never been used. Props for the film became whatever could be found. One of the most iconic of props – lead character Michael Myers’ mask – began as a Captain Kirk of Star Trek mask. It was altered by fluffing the hair, painting it white, opening the eye holes – all under the supervision of the keen eye of a horror film fan. Having a musical influence from his father, Carpenter wrote the movie’s score himself using a theme he’d had in his head for years.

The success of the Halloween movie and the franchise is because it is relevant to the horror film audience – the fans. The product is the result of the value proposition – created by the intersection of competency and passion…but its success is driven by the relevance.

I hope you’ve had a happy Halloween – filled with your favorite treats and free from deranged killers.