Building Your Brand? Be in the NO! 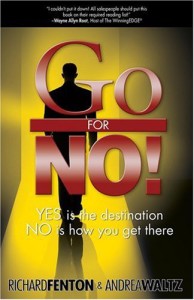 Richard was a young salesman in a men’s clothiers store. He knew his sales would have to improve. One day the district manager, a man named Harold, showed up for a store check. The salesman realized he had an opportunity to impress Harold and perhaps buy himself some more time to improve his sales. As fate would have it, a very well dressed gentleman came in to the store that day and responded to Richard’s “How can I help you?” opening with “I need an entire wardrobe”.  With that, the customer bought shoes, a suit, a sport coat, trousers, socks, accessories – everything totaled over $1,100 in sales – a significant sum in 1980. The young salesman was certain this would be a game changer in his sales career – he waited for the district manager to offer some praise.

After a short time he heard “Yeah kid, nice sale.”  which was followed by this question “Out of curiosity, what did he say no to?” That was perhaps the last thing Richard expected to hear after just ringing up a huge sale. As it turned out,  it was that question – not the sale – that turned out to be the game changer in Richard’s career  – in his life.

Fast forward over thirty years – Richard Fenton is a best-selling author having co-written five books with his business partner – Andrea Waltz. Together, they travel the U.S. and beyond, speaking at events ranging from 50 to 10,000 people. They have a successful company – Courage Crafters, Inc. They traveled 12,000 miles to film and produce a 98 minute DVD documentary titled Yes is the Destination, No is How You Get There. This success is the result of Richard and Andrea embracing a philosophy’ and building that philosophy into this Friday’s Fearless Brand. That brand happens to be the title of their most successful book, the long-time best-seller Go For No! .

Fearless brands are often built on what may seem to be counter-intuitive concepts.

Back in 1980, Harold explained his question this way.  “Yes is the easy part of any sales transaction – just look at the receipt…that lists all of the yeses. If your customer had not said no to anything, how did you know he was done? ” Richard realized that it was his mental spending limit which had ended that sale. Harold went on to say “Richard, your fear of the word NO is going to kill you. If you could just get over that you could really be something’.

Richard and Andrea really are ‘something’ in the world of sales. (and to answer a question they’re often asked – yes, they are married). Having discovered the power of NO,  they have used it to create their own individual fearless brands while building the Go For No! brand.

While the philosophy may seem counter intuitive, it makes all the sense in the world. Very simply, we have been indoctrinated to seek YES – but we will encounter NO’s on the way to that YES.  Hearing NO translates to failure – NO equals rejection and that doesn’t feel good for most of us.  Since hearing NO is unavoidable, we must make NO start to feel good – we have to change our thought process.

As Richard and Andrea point out – yes and no must have equal emotional intensity – we have to bring them into the neutral zone. Doing so can be a challenge in this world of  ‘Go for YES’. Jack Canfield puts it this way “Achieving your dream will take hard work but you don’t have to struggle.”

Andrea and Richard learned to have NO goals after they published the book Go For No!. Their YES goal was to book four speaking engagements per month. When they achieved that they stopped pursuing bookings. They soon realized that their income wasn’t increasing because they weren’t speaking more. So they set a NO goal – receive 100 NO’s when seeking to book speaking engagements. They were about two-thirds of the way to their NO goal when they realized they had more bookings than they could fulfill.

They had to reprogram their thinking – and so do we. It’s ok to hear NO. Celebrate the NO’s.  If  when selling, we choose to approach only the people we believe will say yes, we are certain to be disqualifying people who would otherwise have said YES.

The Go For No! philosophy works in sales – yet has equally strong implications when building your fearless brands. My definition of a fearless brand is built on a platform of authenticity. It is that place where the magic happens – when competencies, passions and relevance collide. So how does Go For No work in branding.

While setting NO quotas won’t work as well, seeking NO’s is critical. To be totally authentic, one must assess countless traits – “Is this trait genuinely part of my brand?” Keep asking that until you hear only NO. Do the same for your skills/competencies. Is it really a skill or is it a wish? Can a skill be enhanced? Am I really tapping into my passion? Are there passions I have ignored? Continue seeking NO’s as you gauge relevance. Does my skill and passion combine to pass the ‘so what?’ test? Is my brand truly relevant? Do I need to target a different audience? – change my skill level? – rethink my passion(s)?

Whether you’re selling or building your fearless brand – don’t be afraid of hearing NO.  As Richard and Andrea point out – “Yes is the Destination – No is How You Get There”.

4 comments on “Building Your Brand? Be in the NO!”