What If ‘The Most Interesting Man in the World’ Really Was? 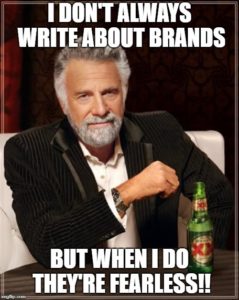 He can speak Russian… in French.

If he were to pat you on the back, you would list it on your resume.

He once had an awkward moment…just to see what it was like.

Sharks have a week dedicated to him.

He has won the lifetime achievement award… twice.

His mother has a tattoo which reads “SON”.

“I don’t always drink beer, but when I do, I prefer Dos Equis…Stay thirsty my friends.”

He’s the most interesting man in the world!

He saved a man’s life in a snowstorm while climbing Mt. Whitney.

He once lived on an abandoned frog farm.

John Wayne “shot” him in the face – seven times.

He saved a girl from drowning in front of thousands.

At age ten, he saved a man’s life who had been trapped in a collapsed building.

He was the surprise special guest at President Obama’s birthday party.

“I promise I’m not the most interesting man in the world.”

He’s Jonathan Goldsmith, the man who played the most interesting man in the world.

Being cast as The Most Interesting Man in the World wasn’t easy. It took 68 years of life, feats most wouldn’t think of much less experience, being out of work and broke, and, finally, being selected out of a casting call of nearly 500 people. The fact that Jonathan Goldsmith’s life has been more interesting than most, certainly contributed to the persona he created which won the imagination and hearts of the Dos Equis marketing people.

Jonathan Goldsmith was born in 1938 in New York without much fanfare – but that would change quickly enough. Goldsmith’s mother, Greta Roth, was a model at the first ultra-elite agency, Conover’s Cover Girls. His father, Milton Goldsmith, played semi-pro basketball, trained boxers, and ended up teaching gym class. When his parents divorced, Jonathan began attending – and being asked to leave – a variety of boarding schools. Goldsmith had a number of jobs throughout high school, being fired from most for one reason or another.

After spending two years at Boston University, where he majored in gin rummy and handicapping dog races, he returned to New York. His father introduced him to a psychologist friend, concerned about Jonathan’s future. That man suggested that Jonathan attend acting classes taught by a Broadway director.

His first class assignment was an improvisation of a man hauling a heavy suitcase filled with cash across a desert. He must have been spectacular as the entire class – and professor – stood to applaud him. That was it. He’d found his calling. That led to two roles on Broadway in which Shelly Winters was the female lead. Winters encouraged Goldsmith to go to Hollywood to meet her agent.

What followed was the stuff that leads to becoming the most interesting man in the world. In Hollywood he drove an industrial waste truck to earn a living while he pursued his acting career. In an audition, a director asked if he could ride a horse – “Like the wind” was the answer from the New York born actor who had never been on a horse. It was typical of Goldsmith’s confidence (arrogance?) and it paid off.

Jonathan Goldsmith’s acting career included over 350 appearances in film and television, many of them Westerns. In 1976 film The Shootist, his character was shot in the face by none other than The Duke himself, John Wayne. The scene took seven takes, maybe nine, each time a blood capsule exploded in Goldsmith’s forehead. Seeing his pain and determination, the director doubled his salary.

Goldsmith’s credits include Bonanza, Gunsmoke, The Virginian, and Clint Eastwood’s Hang ‘Em High. Other shows included Dallas, T.J. Hooker, Charlie’s Angels, and The Doctors. His character died – a lot. He was shot, hanged, blown up, electrocuted, pushed off tall buildings, and left to drown in a swamp.

His personal adventures were exactly that – adventures. He dated countless movie stars, including Tina Louise, Ginger from Gilligan’s Island. He lived on a sailboat with Fernando Llamas, together sailing the high seas whenever possible. Goldsmith worked with, and was friends with, many of Hollywood’s legends – but his big break never came. At age 60, he decided to leave acting and Hollywood.

He started a waterless car-wash business, a network marketing concept which led to annual revenue topping $150 million. He built a home in the High Sierras for himself, his wife and children. He bought a boat. He enjoyed a decade of financial prosperity. Well into his 60’s, the business imploded and his marriage was following suit.

Broke and living in a pickup truck, Goldsmith decided to give Hollywood another shot. He was lucky to find one agent – one – who remembered his work and chose to represent him. Barbara Buky sent Goldsmith on a casting call for a little-known Mexican beer – Dos Equis. Her input was that the agency was looking for a Hemingway-type person, the audition would be all improv, and he had to end his performance with the line: “And that’s how I came to arm wrestle Fidel Castro.”

Upon arriving, Goldsmith saw somewhere between 400 and 500 other actors – most of whom were young, handsome, and Latino. He thought of leaving – good thing he didn’t. The audition took place via teleconference, with the agency watching from New York. Goldsmith sat in an empty room, save for a camera, in total silence. The people in New York were busy, or just watching him – he had no way of knowing. So, Jonathan slipped off a shoe and took off his sock – what else would one do? That drew laughter from the out-of-sight ad folks and the question “Why did you do that?”

His response was simple – “It’s called an ice-breaker my friends.” More than what he said was how he said it. He’d created a persona of a wildly adventurous, somewhat eccentric, bigger-than-life character. He spoke about how meeting Fidel through Che Guevera who had borrowed Goldsmith’s motorcycle and wanted him to ‘date’ his younger sister. He talked about Fidel challenging him to a duel to which he said: “You know, one of us could get hurt.” His final line was “and that’s how I came to arm wrestle Fidel Castro.” Their response? “Thanks. We’ll be in touch.”

Six months later, Barbara received a call saying the agency was going to go with a younger person. “This doesn’t make any sense at all,” she responded. “You can’t be interesting if you’re young.” Soon after, she received a call with a different outcome.

For the next ten years, Jonathan Goldsmith played the role of The Most Interesting Man in the World. Sales for the once small, regional, Mexican brand exploded – more than tripling. The Dos Equis campaign, and Goldsmith’s character, became widely popular leading to countless parodies and memes.

For his part, Goldsmith and Barbara were married shortly after the campaigned began. They live in Vermont where Jonathan enjoys the quiet, and simplicity of nature. He chops wood. He fishes. He does an enormous amount of philanthropic work. He’s met celebrities ranging from Leonardo DiCaprio to Jennifer Lawrence to President Obama, with whom he’s become close friends, to Tom Brady – all of whom recognize him as the world’s most interesting man.

For their part, the marketing folks at Dos Equis decided in 2016 to move to a younger “Most Interesting Man”. Goldsmith’s character is last seen preparing to head to Mars. Goldsmith is humble and grateful for his experience with the brand and wishes them, and the new, younger most interesting man, the very best.

Goldsmith, now eighty, has been signed to be the face of a different alcohol product. In the spot, Goldsmith is in a familiar setting, a bar surrounded by attractive women. He looks at camera and says: “I told you I don’t always drink beer…. Astral Tequila.”

No, Jonathan Goldsmith is not the world’s most interesting man – he doesn’t even play the role any longer. Yet his life has been rich, full of adventure, and excitement – more so than most. When it comes to building a brand and living an enriched life, he’s a man from whom we can all learn.

Join the parade – Goldsmith often talks about life as if it were a parade. “You can watch the parade that is life—and live vicariously through others, as many do—or you can get in and participate in your own journey. And the best time to go for broke is when you’re already there.” Don’t be afraid to participate in life.

Avoid the shortcuts – There’s been no overnight success for Goldsmith. He had to live every experience, feel the pain of every failure, embrace the smell of every victory to reach the point he has in life. It’s as true for the actor as it was for the character he played. In Goldsmith’s words: “I believe that there are too many shortcuts; one can pick up the appearance of success through material things and the so-called visual accouterments of success.”

Be grateful – give back – Always humble and grateful for his success, Goldsmith is committed to giving back in every way he can. He has taught acting and art in prisons in California. He’s spent time disarming land mines in Laos with the Mines Advisory Group and helped to found Free Arts for Abused Children. He works with the Make-a-Wish Foundation and Hunger Free Vermont. We all have a great deal to be grateful for. We all have the ability – and the obligation – to give back.