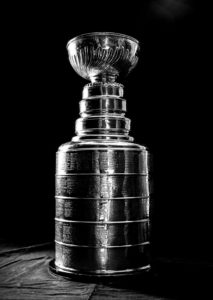 In 1893, the innaugural Dominion Hockey Challenge Cup was awarded to Montreal HC (Hockey Club) as Canada’s top ranking amateur ice hockey team. The award was concepted, created and awarded by the Governor General of Canada. He first encountered the sport in 1888 upon arriving in Canada as Queen Victoria’s newly appointed governor.

His two sons fully embraced the sport, not only playing, but also forming a new club known as the Ottawa Rideau Hall Rebels. At the time, hockey was an amateur sport. It was relatively new to Canada, with only Montreal and Ottawa having hockey leagues. The Challenge Cup was placed in the care of two trustees who would enforce the original guidelines stipulated by the governor, settle disputes and maintain the cup. The actual award – a silver rose bowl – was to be kept in the possession of the winning team until they lost a challenge match at which time the winning challenger would take possession.

It was up to the trustees to determine which leagues and teams would be eligible to play for – and win – the cup. For the first fifteen years, the cup was awarded to amateur teams across Canada. With the rise of professional hockey leagues however, a different award, the Allan Cup was created for amateur competition and winning the original Dominion Cup became the goal of the pros.

The competition evolved into a competition between the winners of the National Hockey Association (NHA) and the Pacific Coast Hockey Association (PCHA). From the beginning, it was clearly stated that the cup was exclusively for Candian teams. That changed when the PCHA accepted a U.S. team. The trustees altered the rules allowing that the cup  would be awarded to the best team in the world.

Several professional leagues had formed, including the National Hockey League (NHL) in 1917. The professional scene had become a true survival of the fittest. The PCHA merged with the newer Western Canada Hockey League (WCHL) in 1925 in an effort for them both to survive – but that merger lasted only one year. The NHL emerged as the only league competing for the much sought after cup.

In 1947, the trustees signed an agreement with the NHL giving that league control of – but not ownership of – the cup. With the power to determine how the winner of the cup would be determined, the NHL’s association with the cup was solidified. The cup went on to be awarded every year with the exception of two – 1919 when the Spanish influenza epidemic forced the cancellation of the championship series, and again in 2005 when a labor dispute wiped out the entire season.

That award has gone on to be the single biggest championship trophy in all of professional sport – both in interest and in size. It is the only award whose name also refers to the leagues’ entire playoff competition. Other leagues commission a new trophy every year and each winner keeps their version. In hockey, the same cup passes each year from winner to winner. Tradition has it that the name of every player and coach from the winning team is engraved on the trophy. In one of the most unique traditions in all of sport, each participant is given their own day to have the cup and do with it as they wish.

The history, legend and lore of the award result from Lord Stanley’s Cup being a fearless brand.

When Lord Stanley of Preston first awarded the Dominion Hockey Challenge Cup, he had no inkling that it would soon carry his name – much less become the most coveted award in sport. Players literally won’t touch the Cup if they have not been on a winning team. Many won’t even be in the same room as the Cup. However, once they’ve won the cup, all superstition is left behind.

Tradition has it that the Cup is handed to the captain of the winning team while they are still on the ice after the win. Each player on the team takes a skate around the rink typically holding the Cup above their head. Every player, coach and staff then drink champagne from the Cup.

During the following year, the winning team is allotted one hundred days for their players, coaches and key staff to have their own day with the Cup. It is for that reason that the Hockey Hall of Fame employs a full-time escort who travels with the Cup. Player activities have ranged from using the Cup as a drinking vessel to brining it to the player’s home town for the day; from rumored Cup appearances at “Gentlemens Clubs” to it being used to baptize the Colorado Avalanche’s Sylvain Lefebvre’s first child.

The Cup is designed with five rings on which the winner’s names are engraved. Once all five have been filled, the oldes ring is removed, sent to the Hockay Hall of Fame for display and replaced with a new ring. Yes, Lord Stanley’s Cup is a symbol of tradition, accomplishment and aspiration.

Whether you’re a hockey fan or not, there’s much to learn about branding from the Stanley Cup.

Celebrate your uniqueness – The Stanley Cup is unique in countless ways – and that fact is what sets it apart from all sports awards. When it comes to their greatest award, hockey has never attempted to emulate any aspect of the more ‘major’ sports. That dedication to its unique heritage is what makes it a fearless brand. Always embrace your unique attributes – they are what set you apart from competition and define your value proposition.

Be diligent – Others can have a negative impact on your brand – regardless of their intent. Many will attempt to be advocates for your brand while not having an understanding of your brand’s true value. Others will have an impact because they are focused on their interests without a care for your brand. This happened once with the Stanley Cup when in 1984, the Edmonton Oilers owner added his father’s name to the cup (it has since been covered with x’s). Protect your brand’s integrity – it’s up to you to manage your brand.

Be flexible – Your brand has to be consistent while adapting to changing conditions and opportunities. The Stanley Cup was created for a specific reason – acknowledge the best amateur hockey team in Canada. As the popularity of professional hockey grew and the sport expanded geographically beyond Canada, the recipient of the Cup changed. At the same time, the basic essence of the brand remained constant. It is imperative that you remain committed to the essence of your brand yet be ready to adjust your strategy as the market dictates.

It may strike you as odd that I suggest you look to learn about your brand from a nearly 3 foot tall, 34.5 pound piece of metal. Perhaps it is – but it is also an opportunity to gain insights that will upgrade your brand, create greater value and drive powerful results. Afterall, that is exactly why buildng a fearless brand is important.