Want to Know That You’re Right? Prove Yourself Wrong! 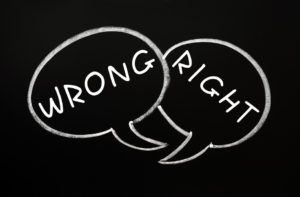 I attended a small private high school in Metairie, Louisiana. Our assistant principal and Spanish teacher was Elliot Ross Buckley. He was a terrific teacher and a man that I admired greatly. He went on to be General Counsel for the Occupational Safety and Health Review Commission after serving in the Justice Department under President Ronald Reagan. I don’t know why he chose to teach high school, but I do know how lucky I was that he did.

He started a debate club and I quickly joined. His first proposition was a hotly contested concept in the day – “Should the federal voting age be lowered from 21 to 18 years of age?” I enthusiastically volunteered to take the affirmative argument, but Mr. Buckley assigned me to the negative.

I was confused and told him that I couldn’t take that side as I was in strong disagreement. That’s when he made a statement that I didn’t fully appreciate at the time – but do now. Mr. Buckley said, “Bill, what better way to prove that your position is right then to fully explore the opposite view?” He went on to explain that by thoroughly investigating a position I didn’t think was right, one of two things would happen.

Now that was enlightening – and helped explain why Mr. Buckley was so successful in his career.

That lesson comes to mind all these years later as everyone has the ‘right’ view.

The differences range from the ridiculous to the sublime – from the future of our country to the antics of the Kardashians. Where’s Mr. Buckley when you need him?

I’m not saying that everyone needs to agree with a different view, but it would sure be better to understand it – to not dismiss out of hand a new or different idea. What would happen if each of us took the time to learn the rationale behind the opposing view?

Here are some likely outcomes:

Mr. Buckley made some suggestions all those years ago which are still valid today: